Filming & Photography at the Market

Filming & Photography at the Market

Thank you for thinking of the Market for your filming and photography needs. Before you apply for a permit please identify what type of filming/photography you are looking to do, editorial or commercial?

All filming in the Market must be approved by the Pike Place Market PDA. The Market extends nine-acres from 1st Avenue to Western Avenue and Pike Place to Virginia Street and includes signs and scenes that are protected as the PDA’s trademarks. We try to accommodate all projects that are submitted and align with the Market’s charter, mission and brand.

Photographers or members of the media on assignment to cover a news story related to Pike Place Market or its merchants, vendors, craftspeople or staff, should contact the PDA Marketing Department as soon as possible to request interviews and filming access before entering the Market.

The Marketing department will assist in granting access to the Market as well as arranging film locations and interviews.

PLEASE NOTE: No filming will be permitted on weekends or holidays.

All commercial filming or photography must be authorized by the Pike Place Market Preservation and Development Authority (PDA). Film productions that align with Pike Place Market’s mission and brand values receive priority. Our mission as stated in the Market’s charter is to support farmers and food retailing as well as local, independent businesses. The PDA reserves the right to approve or deny permits.

To begin a request for commercial filming or photography, please complete a filming application at least 15 business days prior to your intended start date.

Learn How to Submit an Application (5)

Apply here. Please submit all applications at a minimum of 15 days before the desired shoot date.

All requests are evaluated on an individual basis. Film/Photography productions that align with Pike Place Market’s mission and brand values receive priority. Our mission as stated in the Market’s charter is to support farmers and food retailing as well as local, independent businesses. The PDA reserves the right to approve or deny permits.

The PDA is committed to protecting the use of Pike Place Market trademarks. Use of the PDA’s trademark on any products or to promote products or businesses is expressly prohibited unless a licensing agreement has been approved by the PDA Council. This includes the use of photos or video taken within the Market or of the Market for anything other than personal use, including images that are sold/considered for commercial use after the fact. All commercial filming or photography taken in the Market requires a filming permit obtained in advance.

If your project is approved, production will be responsible for providing a certificate of insurance, signing the Pike Place Market filming contract, and paying associated fees. Requirements for insurance will be listed on the contract.

Drones and FAA Regulations in the Market

All UAS use is subject to the City’s laws of general applicability, such as Seattle Municipal Code (SMC) 12A.06.050 which states that a “person is guilty of reckless endangerment when he recklessly engages in conduct which creates a substantial risk of death or serious bodily injury to another person.”

Visitors are welcome to take photos and video for personal use on a visit to the Market.

Anything other than personal use or with more than one handheld camera requires a filming permit from the Pike Place Market Preservation and Development Authority (PDA).

In consideration of public safety, tripods are not allowed within the nine-acre historic district for personal use. 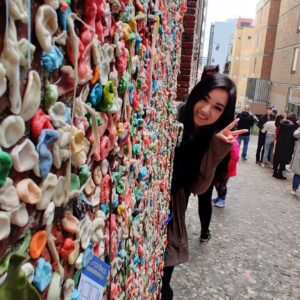 Questions?
Please fill out the form below and we’ll get back to you.